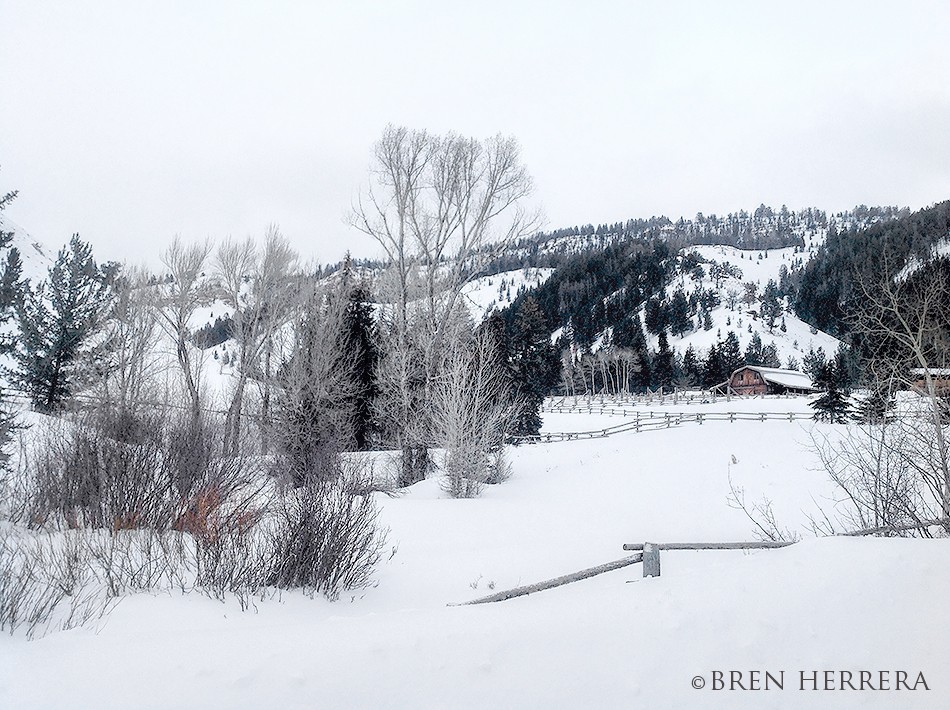 One of the best things I did this year was take a 5-day snowboarding vacay with my 2 of my 4 siblings. We’ve all engaged in and loved winter sports since we were younger, but in the last 7 or so years, we’ve been super intense about that powder life. Well, them really. We started skiing some 18 years ago and we didn’t love it. Snowboarding was  just starting to become popular and so we tried that. We are the adventures type and it made much more sense. It was novel, not too many people were into it and there was so much to learn. We fell in love and never looked back. Only I moved to Atlanta and never thought about boarding while living down there. Even when I’d come home, I’d dismiss the idea because I was so busy playing catch up.

Everything changed when I moved back two and a half years ago. Two of my three brothers and my sister bought season passes to mountains no more than 2 hours away and would go every weekend; sometimes taking half days off work to morning or night board. They had taken two major trips to Colorado and rubbed it in my face. I was still in Atlanta so I missed out on the fun. But also, our conditions here on the East coast aren’t that great. I wasn’t convinced  I needed to spend that kind of money on fair-weather conditions.

Their annual trip earlier this year was unanimously decided against the east coast. And that’s when I jumped on. Jackson Hole Mountain, WY had been making the rounds as the no. 1 ski resort in the nation by a few outlets and as such my brother, head of our committee, said we were westbound. I was still on the fence: hadn’t been boarding in 10 years; didn’t have gear; wasn’t properly equipped; and wasn’t excited about the idea of spending 5 days out west at what’s named the best of the best mountains, all to be sliding down from bunny slopes.

But they got me. And I quickly went shopping with my sister, got fully suited, and jumped on board with the crew. 8 days later, 6 of us landed in Jackson Hole, WY — the wild, wild west like no other!

I’ve always said I’m a farm girl at heart and that eventually I’ll end up living on a ranch, whether it be in the US or abroad. I promise.

And Jackson Hole is a large ranch to play in all year long. 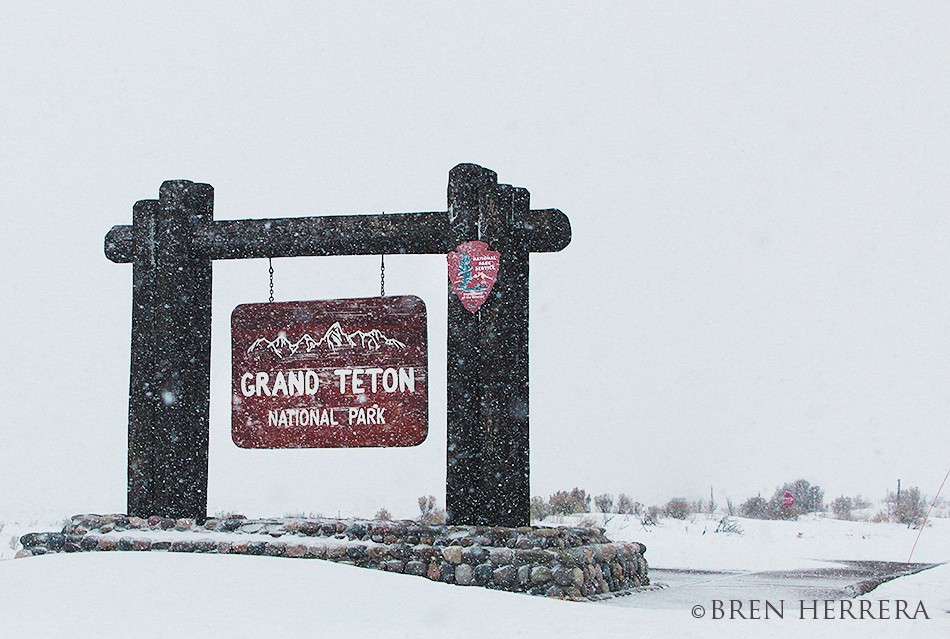 Winter there is a true winter wonderland. I was there to snowboard — my first time in a decade — but I had to see the valley’s other goodness I kept hearing about. It was too gorgeous not to explore the land and natural habitats. And although it was blistering cold, I hopped in an SUV and took a private “safari,” with Jackson Hole Wildlife Safaris, just an hour after checking in to our lodge. 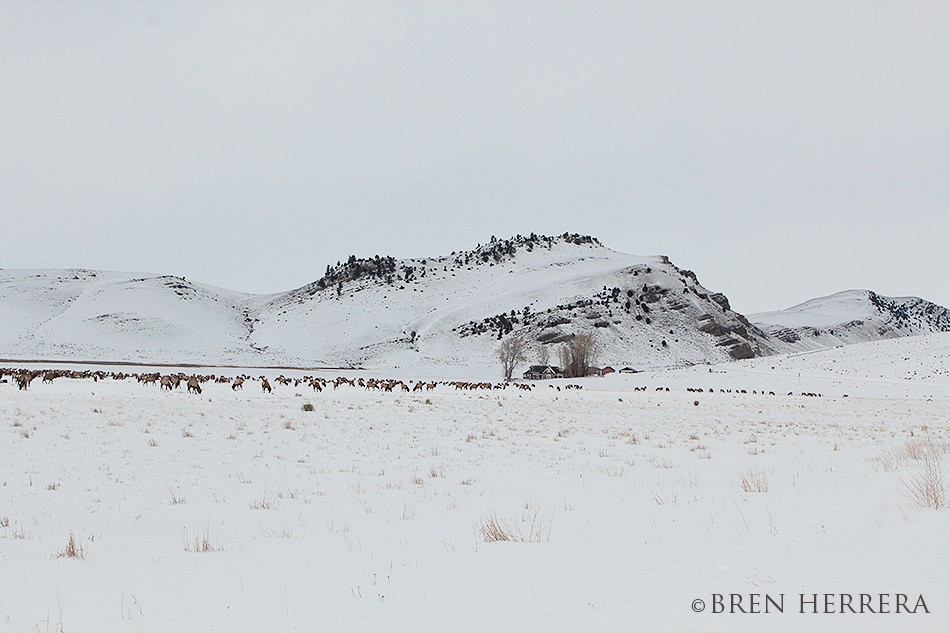 Our guide, Jason, owner of the wild exploration crew, was the perfect person to introduce me to the habitat! He picked up my cuñi and me from Snow King Resort just minutes after unpacking and took us out to the field immediately. He strategically used his vast knowledge to tease me into excitement and it worked. No bother I just had come off 6 hours of traveling, I was revved up to see wildlife. In the snow.

And no sooner than having pulled up to the National Elk Refuge, a government preserved piece of land, housing Jackson’s wildlife and endangered species, the snow was snowing and wind was blowing. The plains were already covered with a beautiful white blanket. But the skies opened up and the flakes started coming down in a vertical sheet. It was late Saturday morning. 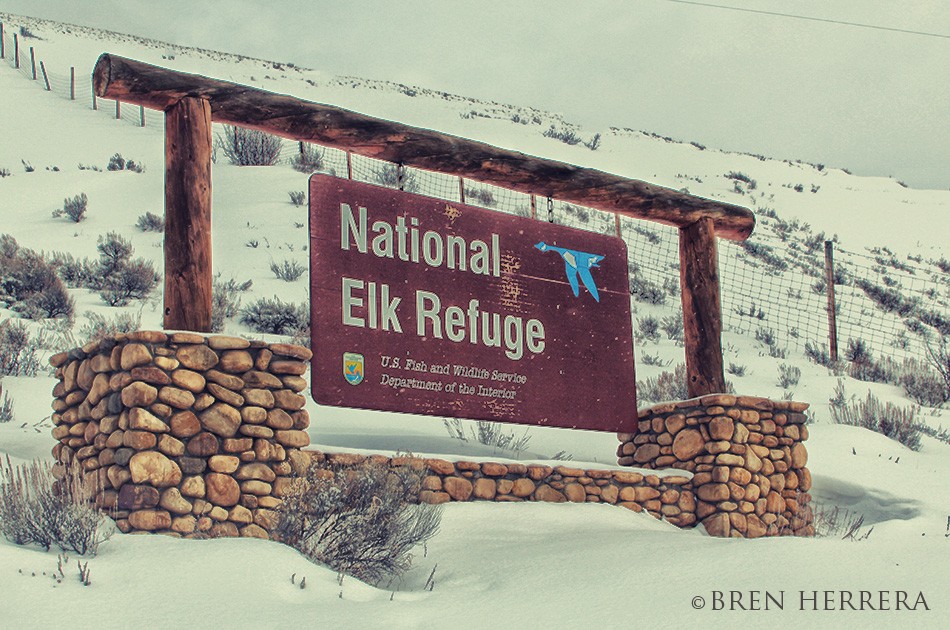 The refuge was full of elk, deer, bighorn sheep, antelope and bison, which required us to pinpoint with super binoculars. The snow kept falling and we kept trekking through the acreage. The serenity was breathtaking, leaving speechless us every time Jason stopped for us to observe the animals. The area was pretty scarce, wildly spread out and seemingly virgin. The Miller House, originally built by Teton Jackson, hence the valley and mountain range name, stands grand and attracts every visitor. The trees surrounding it have as much stature as the culture homestead ranch. I have a thing for trees. I can just stare at them. But it’s really in the snow that’ll mesmerize you. 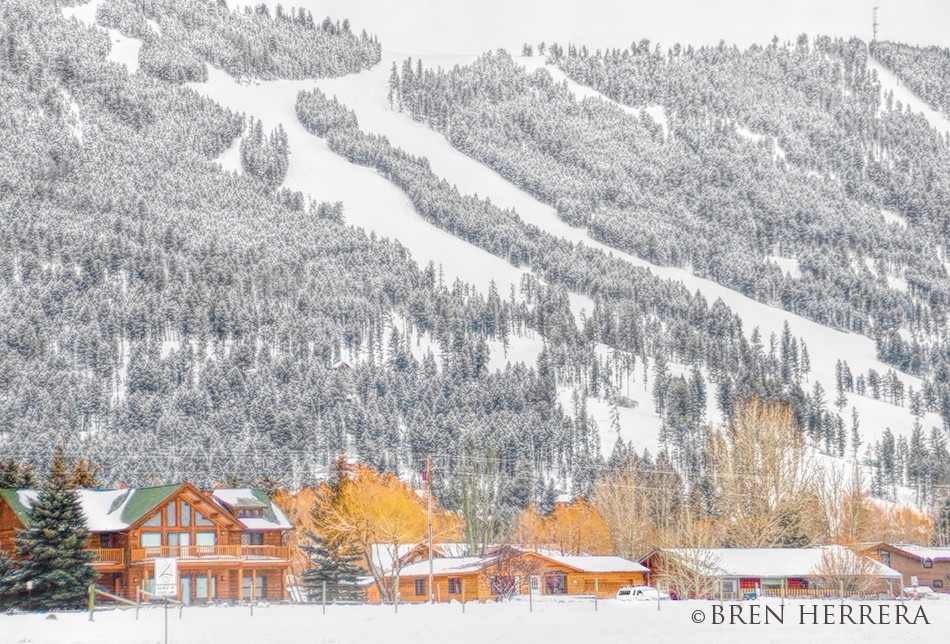 (Standing on the Elk Refuge property, looking toward the main street entrance) 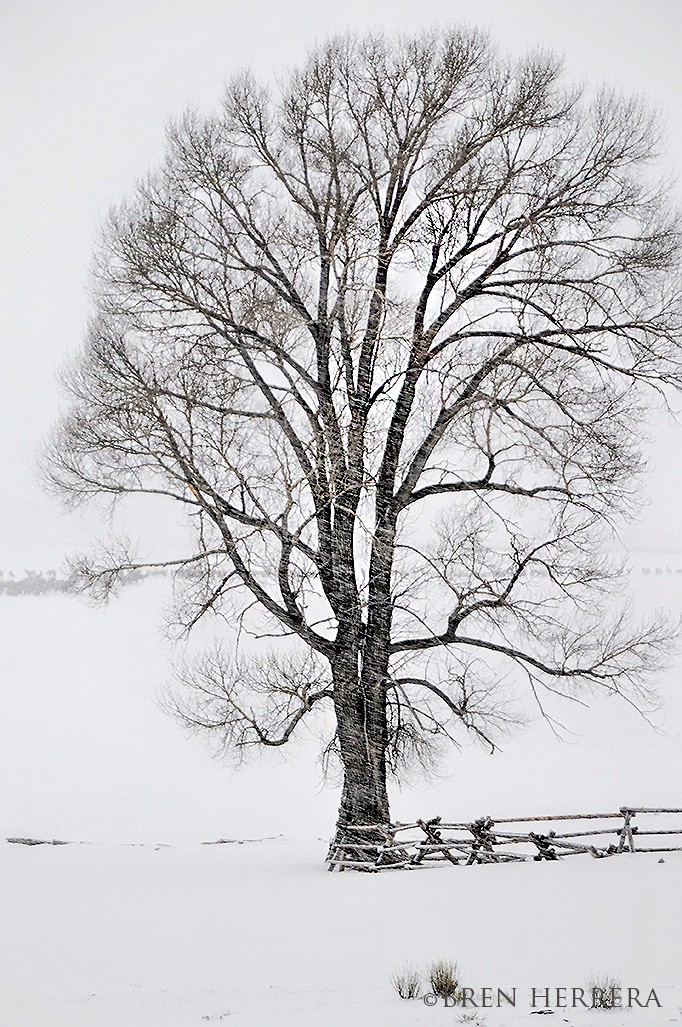 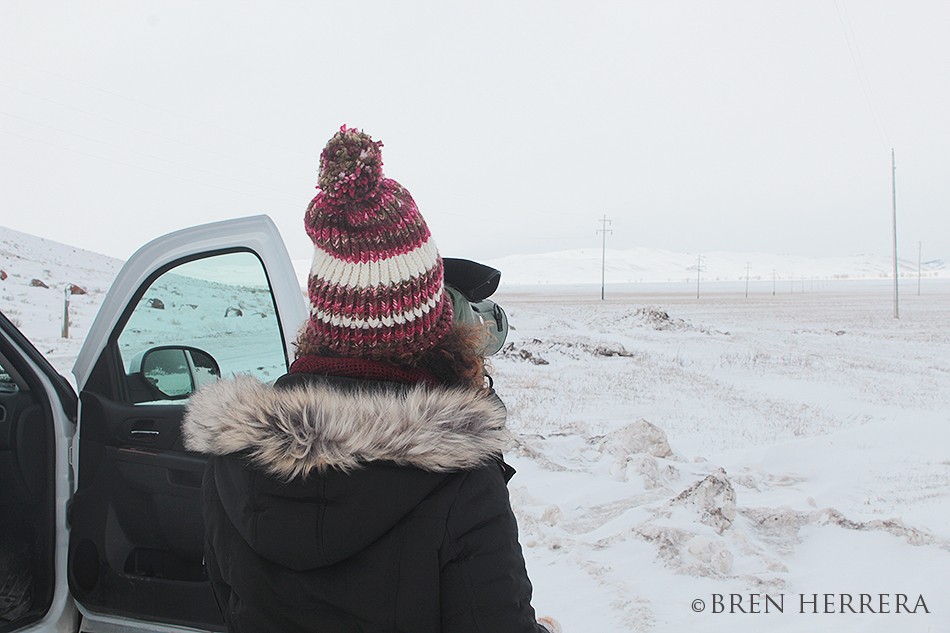 (Looking at bison in the distance) 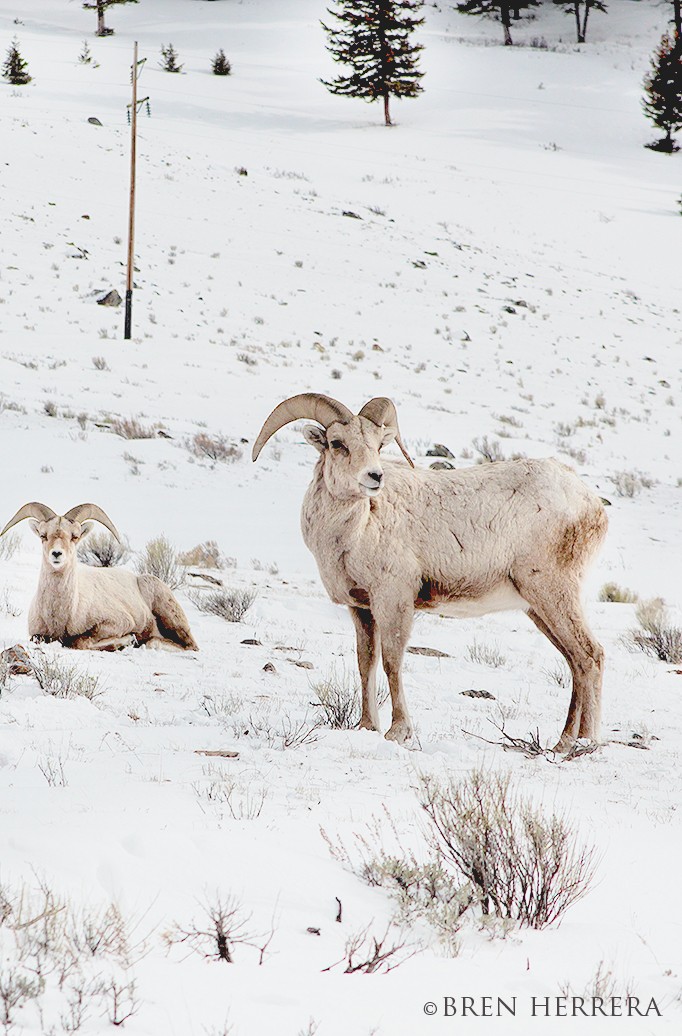 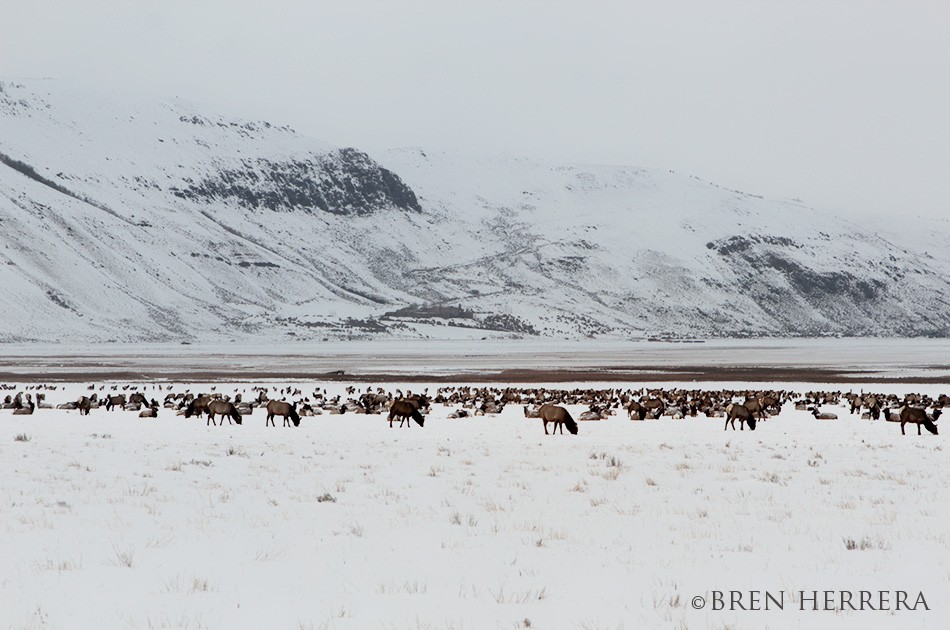 An hour at the refuge was sufficient time to open the book of all the history Jackson holds. We occupied the rest of our Saturday carefully driving outside of Jackson, far enough to remove ourselves from any traffic. And then I really saw snow. The snow kept pounding down, at one point forcing us to stop at an intersection where we saw 4.5 feet walls of packed powder. Visibility was treacherously low, creating the absolute picture perfect postcard of a true winter wonderland.

The town we drove through was the most beautiful wintry mix of ranch houses and fields of trees co-mingling with streams. 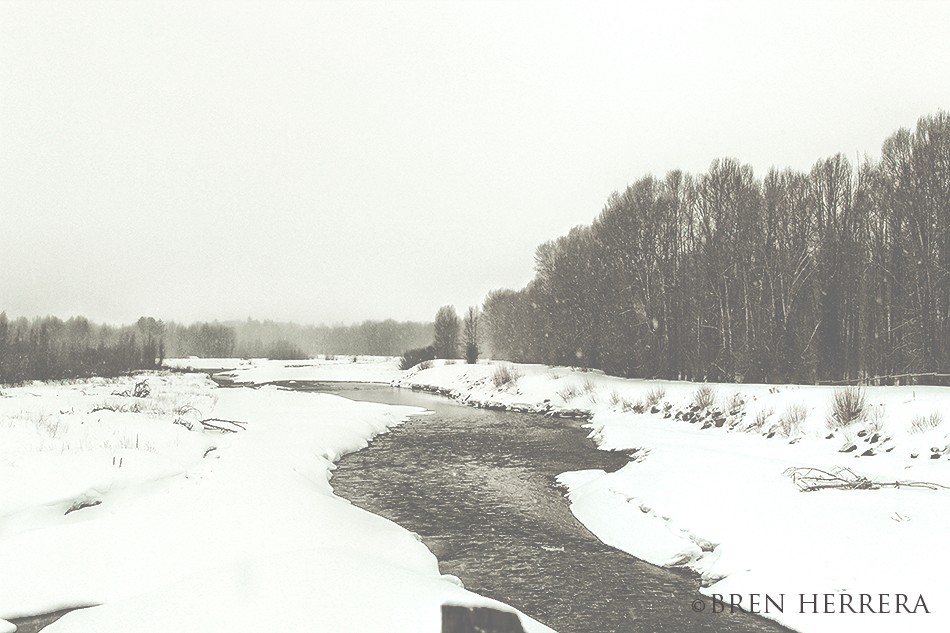 (On a bridge, overlooking a river stream in the town)

After driving around the outskirts a bit, in search of moose, we ended our active tour at the Gros Ventre River Ranch. The meandering drive there was fascinating and enigmatic. We spotted coyote and wolf and for the first time outside of a zoo, I saw an American Eagle perched up a barren tree. That was the moment I wish I had a super camera with a super lens. She was at least 1/2 mile away, but the contrast of her black frame against the white backdrop allowed me to laser focus. And then she flew off before I could zoom the binoculars.  I asked more questions than a kid on a field trip. Poor Jason was multi-tasking like a champ.

But not for my curious mind along the drive, I’m not sure I would have learned this stream below was the featured in a scene with Jamie Foxx in the film Django. That very stream below where the birds are hanging loose. 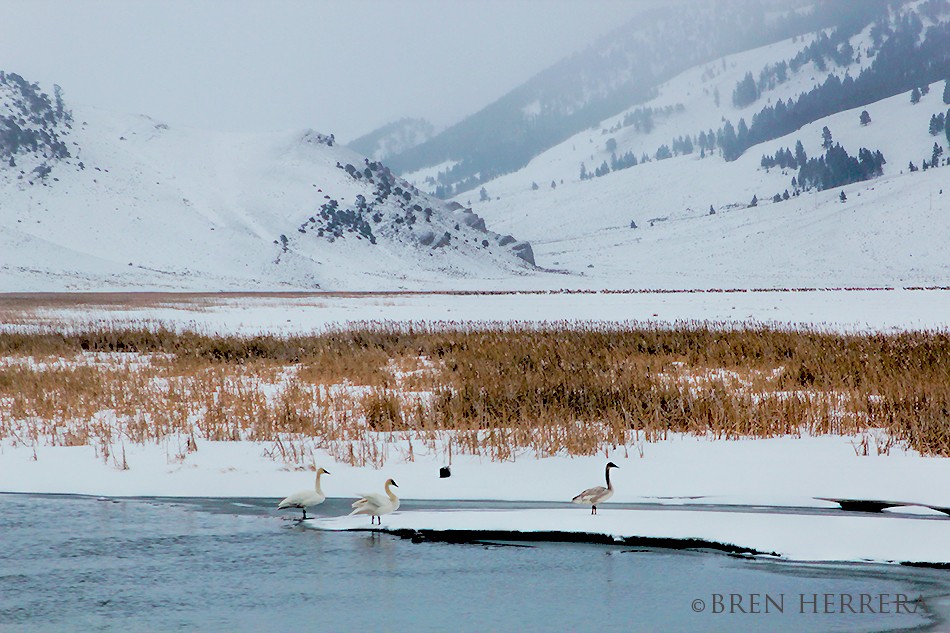 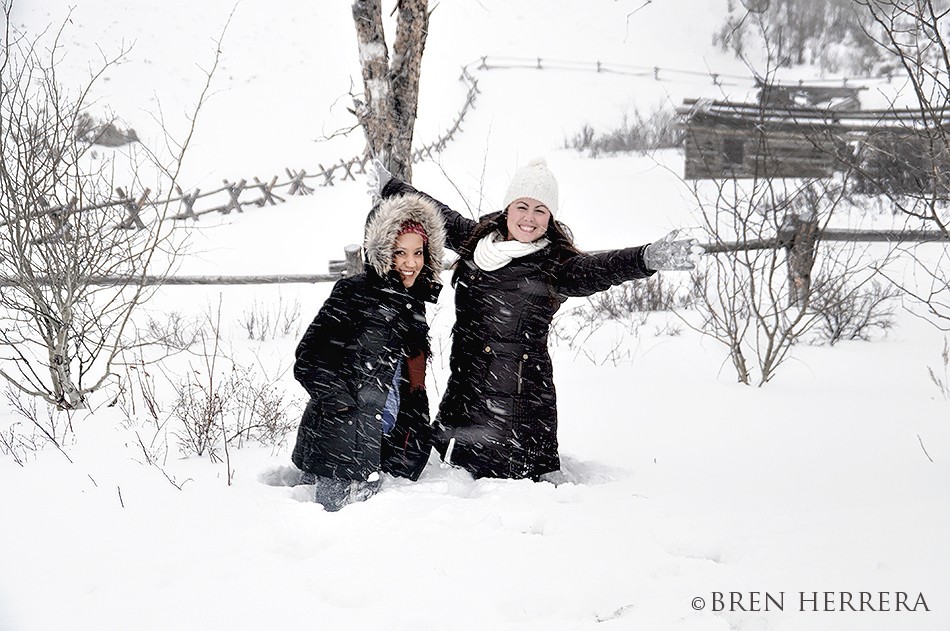 Once at the top of the ranch, or the end of road, as they say, we intercepted a young lady during her long walk to the ranch office. She was over-top-friendly and entertained more of my questions. She was on her ski shoes accompanied by her jovial dog; The ranch owner in his car making his way out of the ranch, later pulled up and joined the conversation. She continued to indulge me and offered great insight on the ranch’s atmosphere during the summer but I couldn’t think past the amazingness I was staring at… shear snow which was not letting up. 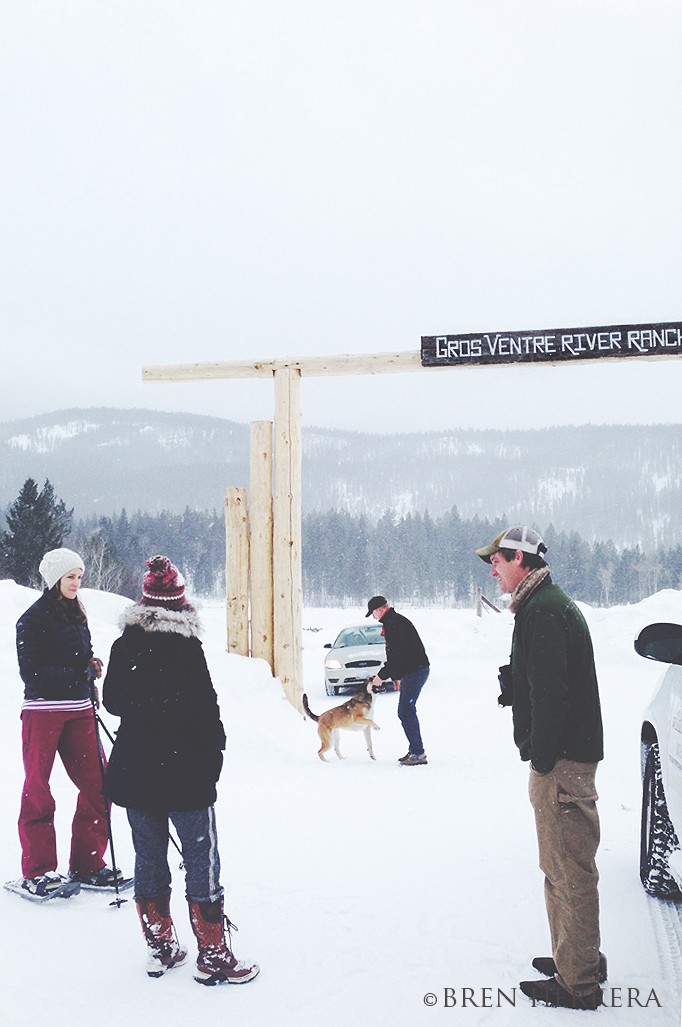 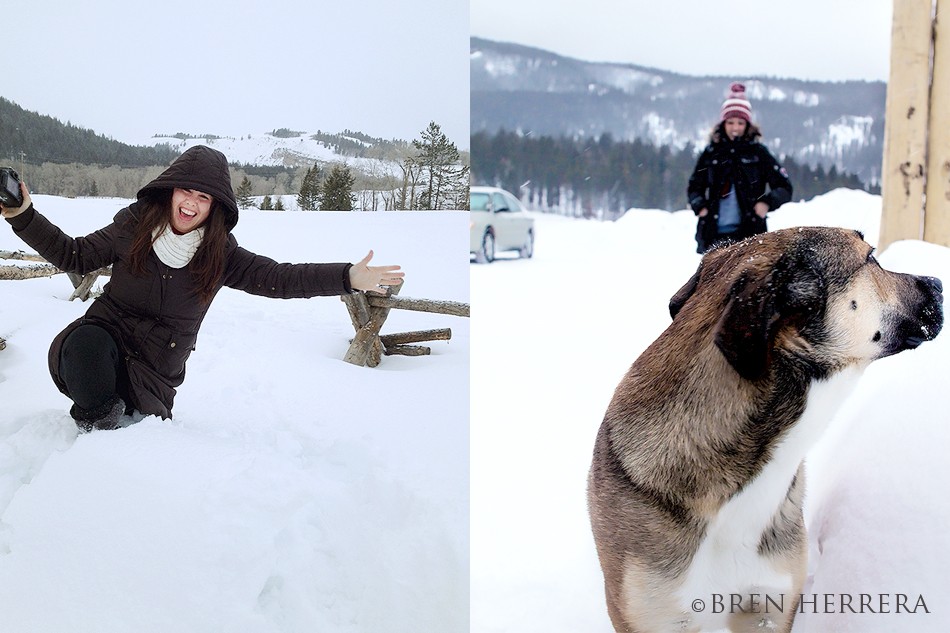 A few more pit stops on the way back to our lodge was a good idea since my only other opportunity to really see the town would be on the daily shuttle rides into the mountain for our day-long boarding. Our stop at the local bagel shop for perfectly whipped café au lait and a zip of a drive through a super quaint street bearing vibrant vintage signs, gave us enough energy for one more quick attempt at finding a well-embedded moose.

But no such luck. At least not during the tour. 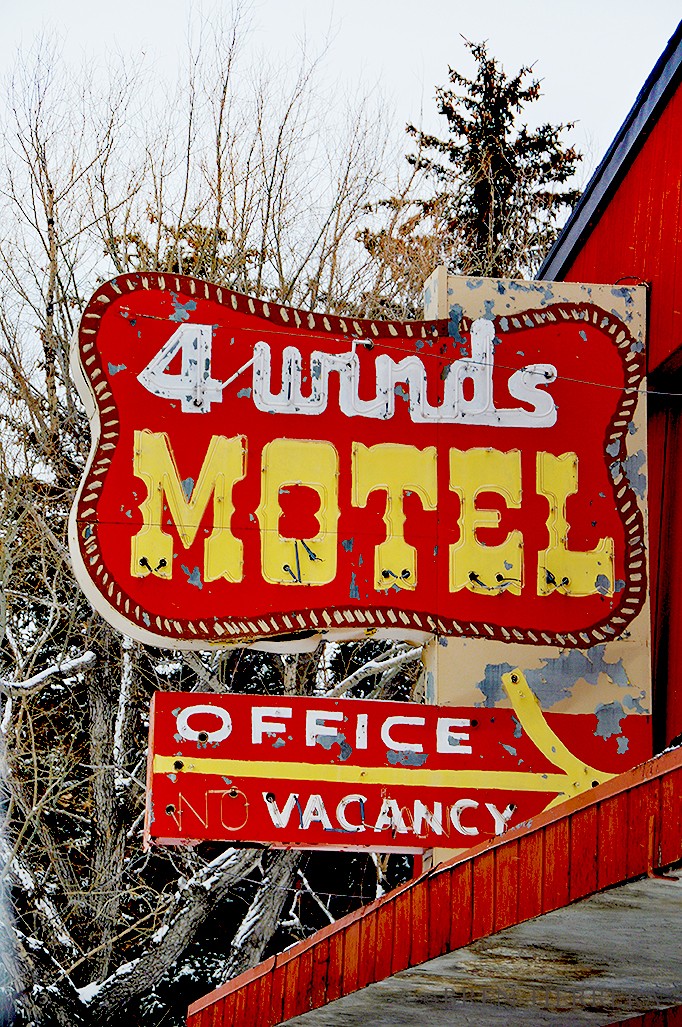 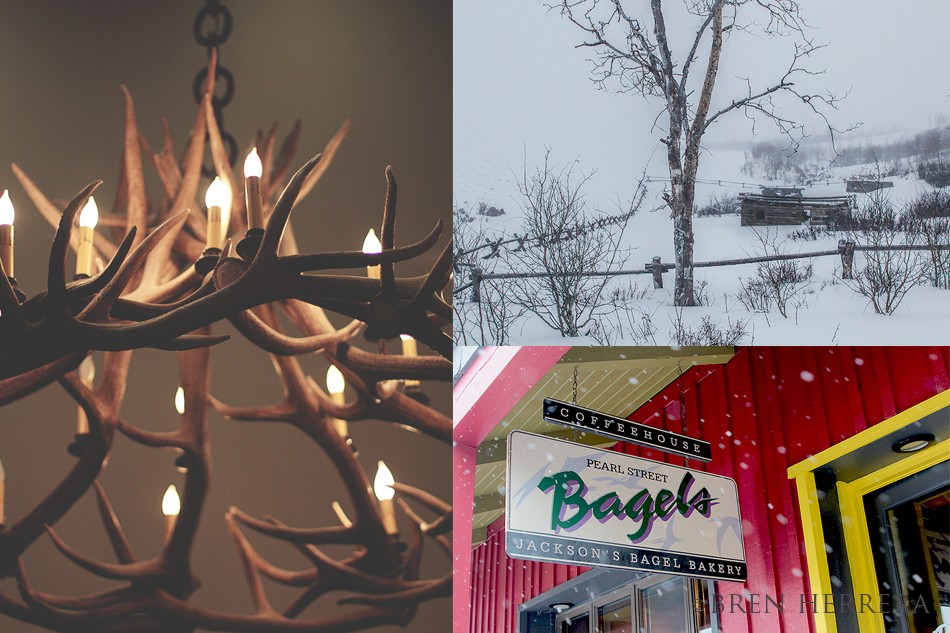 The sun was prepping to set so we sadly started making our way back to our lodge.

But first, an encounter with a dashing deer. Visibility was still impeding our drive so even as slow as we were going, me managed to almost have a collision with a deer. Or two… a herd, really. A group of girlfriends darted across the highway. I was so caught off guard but excited, so I had Jason pull over. I hopped out, in like manner dashed across the highway, and tried to get a few shots of the seemingly scared animals. I was able to catch this one running as fast as she could while her buddies waited for her at the top of the hill. This was common scene in the fields, and even in my neighborhood here in DC, but nothing like a pack of 10 deer making a run for it against traffic.

She was so daring! 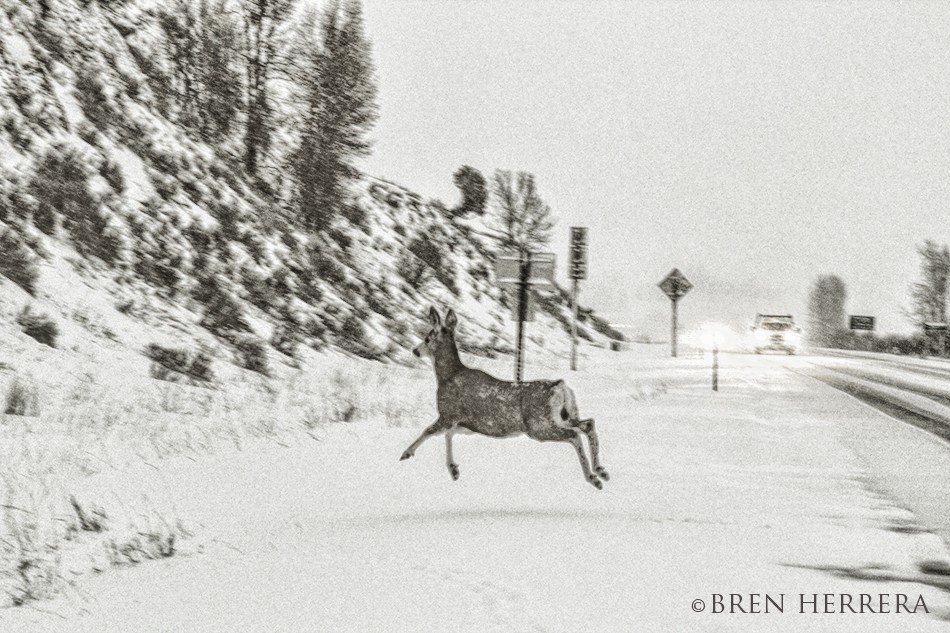 I was there for 5 days… and if all of them were to be as exciting and entertaining as the first, I was golden!

A long day ended in with a fantastic dinner at Hayden’s Post, nestled within Snow King Resort, where we stayed. But you’ll have to come back to see the ridiculously delicious  amount of food my party of 6 enjoyed. Even the chef came out to see what that hype was about. I mean, bone marrow for the guy responsible for teaching all of us how to snowboard, fared quite funny. His reaction to eating that for the first time and having misinterpreted “marrow” set the tone for the rest of the evening.

And finally, lights out in our suite.

Jackson Hole is my new favorite wintry playground! This east coast girl has found a new love on the in the midwest. The prettiest snowy land I’ve seen anywhere in the world. At least up until now. More to come as I share reviews on the 5 restaurants where we dined during our stay. And of course, what the mountain affairs were like! Until the next installment, here are a few Reasons to Visit… as if the wonderland weren’t’ enough!

*Now, how about a safari in Africa! That’s the next thing to explore, no?! A wintry safari can only be topped by a super wild and exotic safari… I’m thinking my next attempt will be with Journeys Discovering Africa… take a looksey… looks fascinating and like a bucket list item for sure!*

Coronavirus and Travell: What You Need to Know

3 years ago by Bren Herrera
This thing is real. Yes, the meme are funny on first glance, but when we consider over 114,000 confirmed cases of Covid-19 and over 3,500 deaths, world-wide, then, yes, the Coronavirus is more dangerous than influenza. The entire country of Italy is shut down....

How to Spend 24-Hours in Madrid

4 years ago by Bren Herrera
Last August, my brother and I made a very spontaneous decision to chase La Vuelta, Spain’s pro cycling tour. 8 days out from an international trip means insane airfare, but we were determined to go. In order to make that happen without exhausting our coi...

Dig This: Boise is More Than Potatoes. Yes, Really.

6 years ago by Bren Herrera
When friends and readers ask me which destination of all I’ve visited in the Sates has struck me the most, most recently my no-flinch response is “Boise, Idaho.” The super-flinch reaction is always a puppy’s duster-tail speed, double-take “did you say Boise?”...

The Lake at Donner Pass

6 years ago by Bren Herrera
My American history is not well-rooted in knowledge acquired in middle or high school. In fact, even most of my understanding of our Civil War and rights era was an intentional decision I made while studying politics at U.VA. I attended one of America's pr...

9 thoughts on “Winter in Grand Teton National Park, Part I”