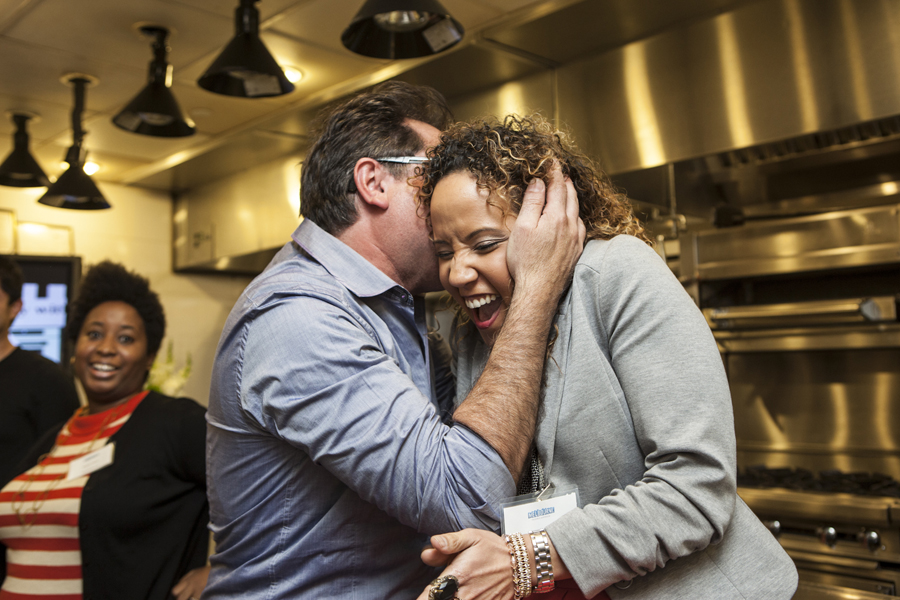 I never thought I’d stand in front of a crowd and channel my inner Oprah…. not the journalist or great interviewer Oprah. Rather, that uber generous, has it all, mother to all single ladies and  ‘I’ll give you my unborn child and all their material things‘ Oprah. But, I did this past Tuesday night in New York.

And it was so classic.

I think I established in the very toddler days of Flanboyant Eats that I live a pretty amazing and solidly blessed life. I get to experience some incredible moments and am always given an opportunity to become better at what I do; to see the world, taste stupendous creations by somewhat unapproachable culinary geniuses; and capture images that inspire me daily. But, it doesn’t just happen, friends. I never talk about the hard, tear-jerking grind I put into my work. I subtly touched in my Nutrilite post a few back that I’ve suffered from anxiety and can now talk about it very candidly. It’s that intense around Casa Herrera. I am passionate about E.V.E.R.Y.T.H.I.N.G. I do. To a fault.

It makes for a happy, loving, vibrant and deliciously beautiful life.

I intended for 2013 to start super slow, affording me some time to regroup and focus on some pending projects I put into motion mid-2012. But, the lingering production schedule for filming ‘Dine Out’ on Chic Rebellion.TV (which took a long break due to the holidays) popped up and I realized I actually couldn’t lay low as far as I wanted to.

So when one major project starts spinning in my head like that, it invites a quasi  unwelcomed  avalanche of existing and new engagements.

4 weeks ago, right before Christmas, I was invited to participate in a tight recipe competition sponsored by the Victoria, Australia Tourism Office. It was simple. I had to create a dish that represented the theme of this year’s Melbourne Food & Wine Festival — ‘Earth’– and pin it to their board on Pinterest. The prize was a trip for two to the F & W festival in early March. It sounded dreamy, but it was so broadly designed and right smack in the middle of our over the top Cuban soirées prepping, that I forgot to Pin.

I finally got around to pinning my recipe on the eve of the deadline —  the black truffle flan (I mean, it can’t much earthier than that, right?) — and was invited to NY for an evening of Australian delights, tastings and where the winner would be announced. 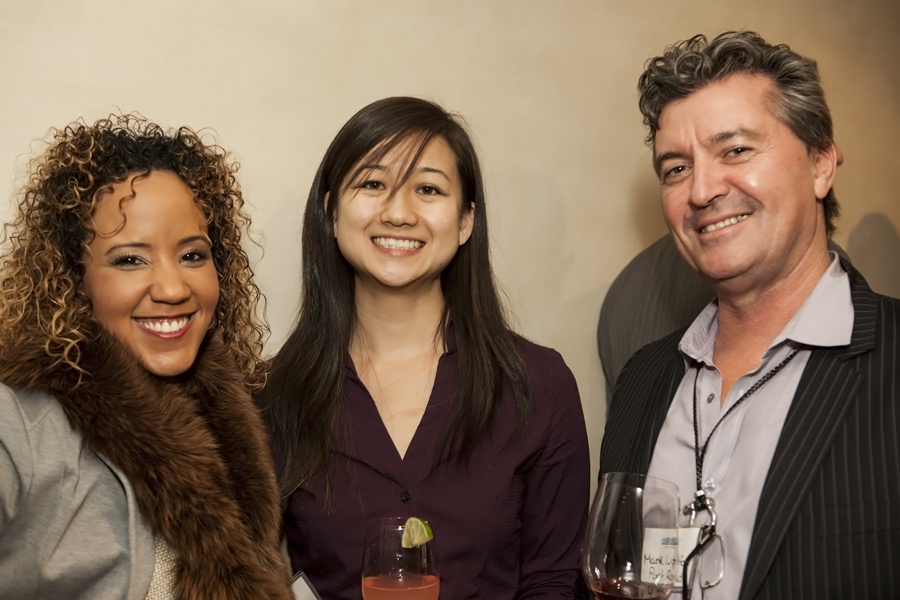 The Astor Center hosted an intimate group of bloggers, editors, foodies and chefs to mingle, talk all things F&W before being ushered into the test kithchen. Australian celeb chef Guy Grossi, who by the way is ultra cheeky, has great presence and extremely friendly, did a demo of his own food — fish en papillote — an Italian classic he grew up eating with his family. We learned about the 21st annual Food & Wine festival which spans 3 weekends during their summer.

We also Skyped with the festival’s director who gave us some detailed information and really got my nerves worked up. 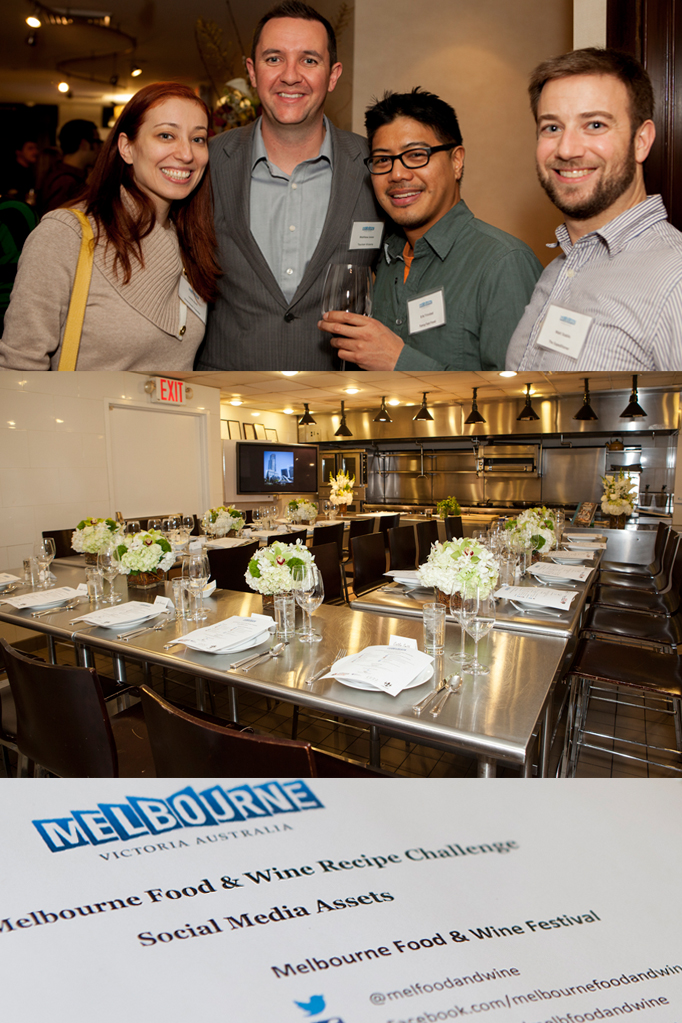 As we made ourselves comfortable on the high tables, we were informed there were 3 finalists of the 10 submissions and we’d all be tasting those dishes. 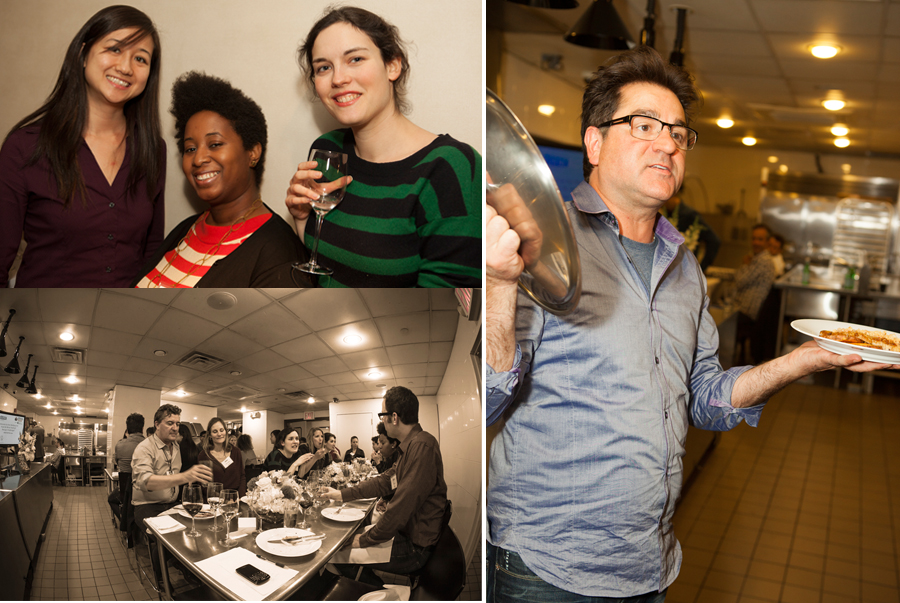 Our 1st course, presented in a chirpy ‘AHA’ manner, was a spicy tomato soup with harissa by Will Budiaman from The Daily Meal. Really earthy but a tad too spicy for moi. Oh, but I did crush the entire bowl.

Our main course was a delicately prepared fish entrée by fellow blogger Nicole Taylor from the Foodculturist. Her skate with finger limes and macadamia with roasted sweet potato was special. She tied the theme by highlighting aboriginal foods, namely the “citrus caviar”.

And I was in complete shock when the 3rd dish came out. My flan. For dessert! 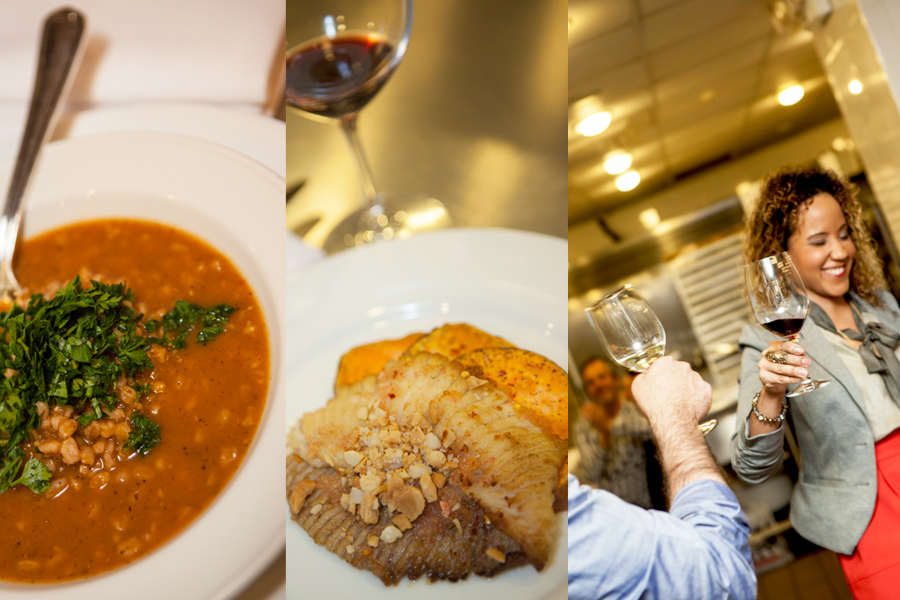 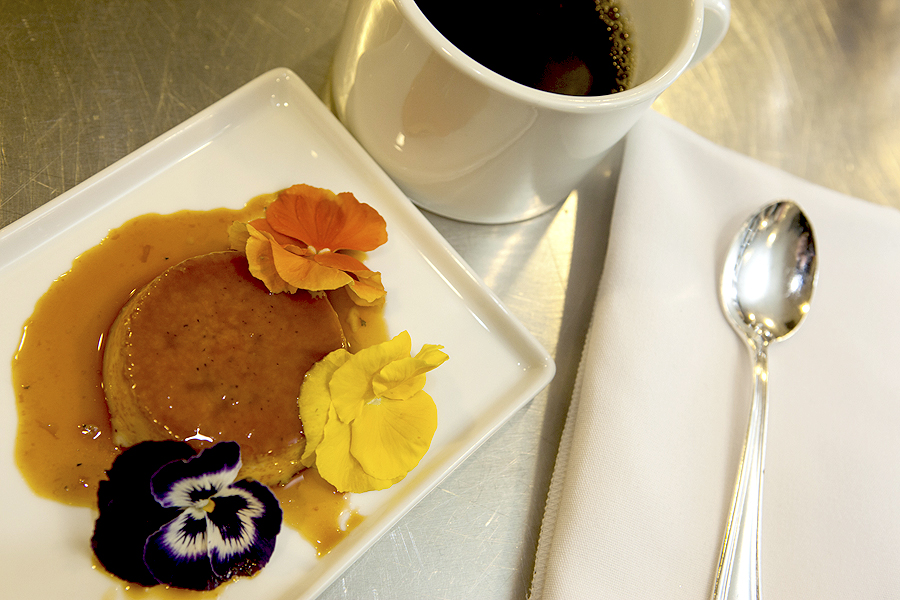 Oh yes! I literally screeched as I stood next to chef Guy to explain how the concept of using truffles came to mind. I mentioned the National Truffle Fest in Asheville as being the inspiration.

I was relieved and immensely satisfied I had made it as a finalist, but still chef Guy and his team had to taste, confer and choose a winner.

I had butterflies all night. I can’t even tell you why. I never get nervous in front of the camera. I’m never fazed by doing large cooking demos in public, but for some reason, my nerves were all kinds of shot. There was a point I couldn’t even eat Nicole’s dish… I was too busy photographing it and texting my family, giving them play by play updates on the evening (see… Cuban families are so over the top).

After a few minutes that seemed to be a dreadful eternity in NY, Chef called us up and congratulated us. I thought we were on an intense episode of  Top Chef as each of our dishes was analyzed…. Guy offered up that standard “But there can only be one winner…” line. Sigh.

Until he said my flan was his favorite and that I was going to Australia! 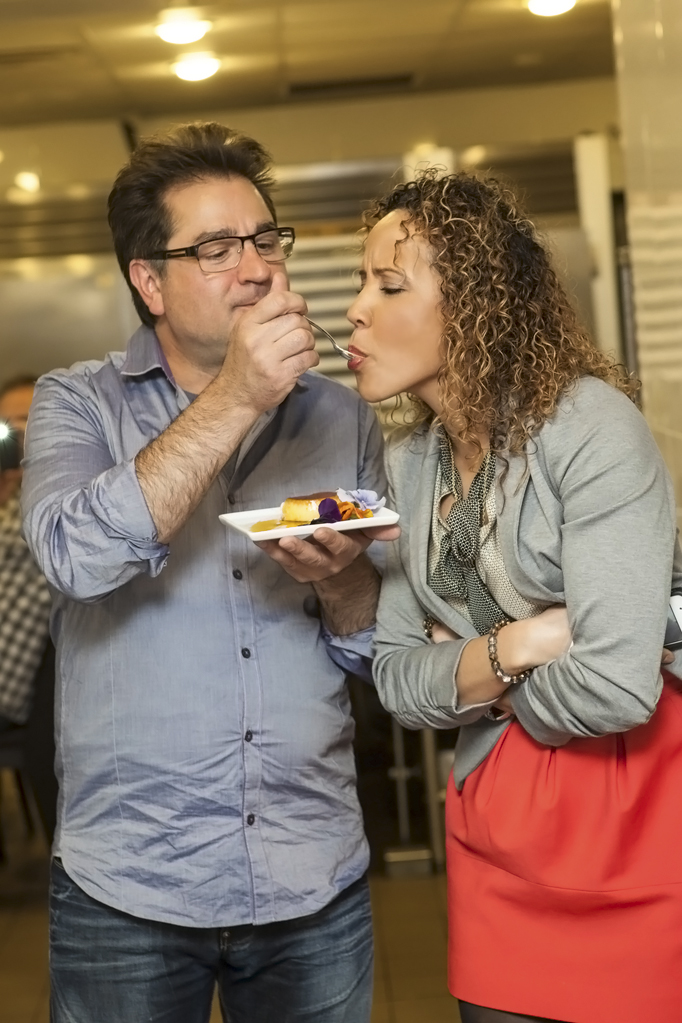 That dreadful eternity quickly turned into a hot NY minute, to use all kind of clichés. My butterflies turned into the cheesiest smile I’ve probably ever given. And I swear I almost passed out in my 6″ shoes while I did a happy dance  as he uttered the most humbling words to describe my flan: “sophisticated, well-composed, articulate, beautifully executed and refined.”

I’ve enjoyed many compliments on my flans, most memorable from Joel Robuchon, but to have another chef make my recipe and artfully plate it as I had originally shared it here on the blog love it, and sexily spoon feed me, adds another element of caché.

We cheered, toasted, tightly hugged and immediately starting jesting about all we’d do in Australia. 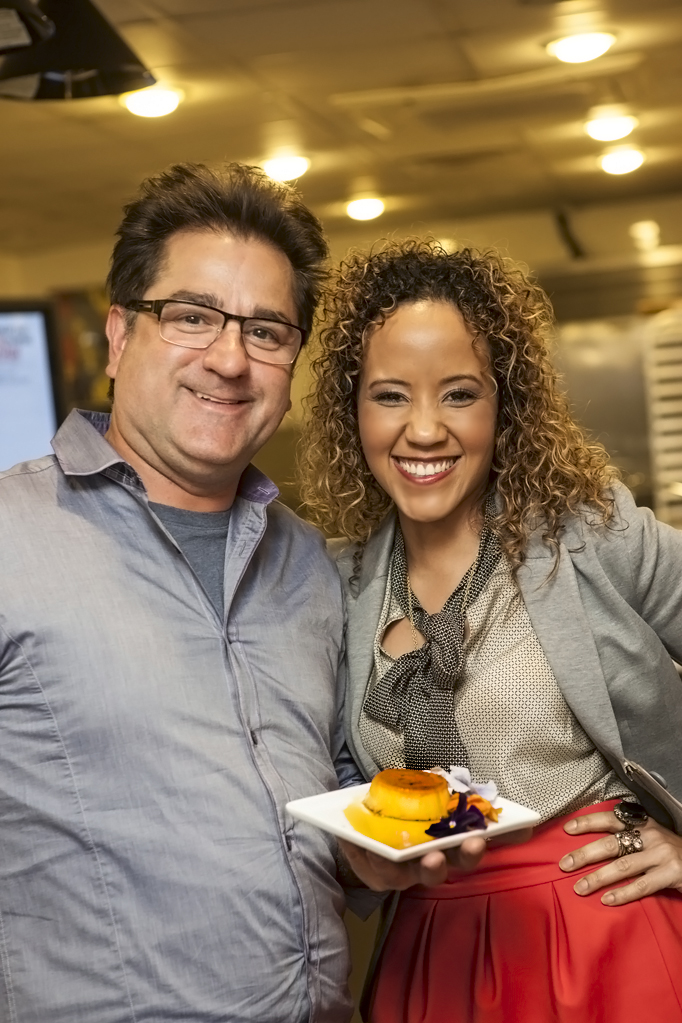 And then the Ellen DeGeneres moment.

Chef Guy gently turns to Nicole and Will, offers them subtle apologies, sugar coated in additional congratulatory words but  invites them along to Australia, too!

And I made new friends that night. All around awesome. 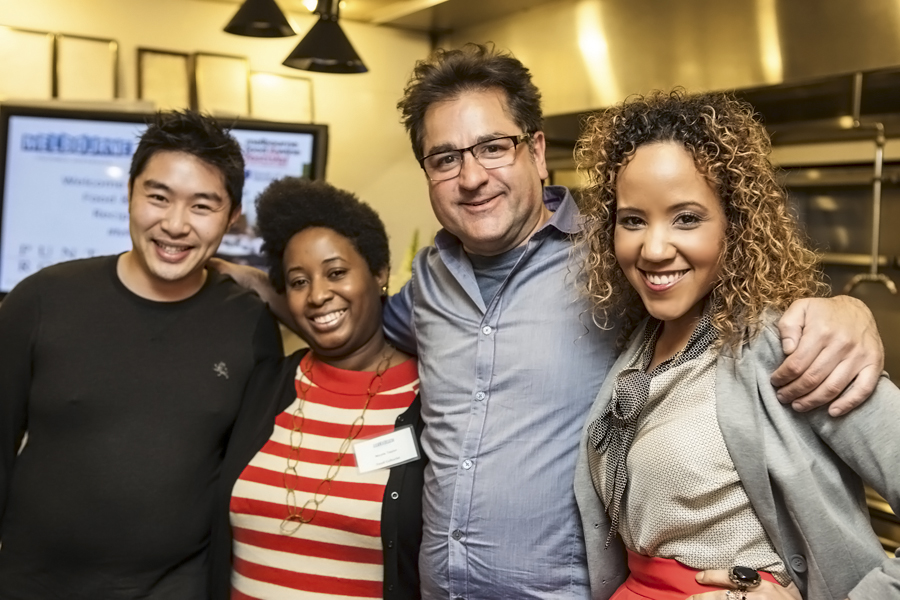 Just when I thought 2013 was going to start sluggish, blissful moments like Tuesday night go down and set the tone for the rest of year!

My little ol’ blog, which actually celebrated 5 years just 3 weeks ago (I totally forgot) has done some amazing things for me and cultivated a life of immeasurable deliciousness and priceless experiences.

And so yeah, no laying low for now… it’s time to think about what I’ll do in Australia for 2 weeks this March. Other than the Melbourne Food & Wine Festival.

So, so tickled, mate.

I never shared the truffle recipe when I blogged about it, but in good measure and because it won, I’m sharing now! Please enjoy. And if you do make it, please let me know what you think!

Kind of #FLANRIDAYS, but in a different way! 😉 XO.

* All images c/o Victoria Tourism.  Here are my Instagram shots from the night. Whisk eggs in a medium sized bowl. Add and combine sweetened condensed and regular milk, truffle infusion (recipe below), vanilla extract and black pepper. Allow any from from whisking eggs to settle. Set aside. Add sugar to an 8″ non-stick skillet and caramelize on medium-high heat until it is golden color, stirring constantly. Make sure not to burn sugar.  When sugar is fully melted down, carefully pour into each ramekin, coating the entire sides (I suggest using a brush if you are not experienced in handling extremely hot caramel).  Add mixture to each ramekin and cover with aluminum foil.

Add 2 cups of water to a 4 or 6 qt. pressure cooker. Gently place ramekins in cooker and close lid. Place jiggler on lid. If your pressure cooker jiggler has different PSI settings, set it to 10. Cook on high for 6 minutes, or until pressure cooker starts hissing. Turn off heat and allow all of the pressure to release itself, or for another 2 minutes.

Remove from pressure cooker after all pressure is released. Refrigerate for 8-9 hours or overnight for best taste. Remove from refrigeration 30-45 minutes before serving to loosen some. To serve flan, loosen the sides of the ramekins using a butter knife. Take a dessert plate, place upside down on top of flan and flip. Garnish each ramekin with shaved truffle.

Heat olive oil in small skillet. Sauté 4 tablespoons minced truffle, shallots, thyme  and salt until onions are translucent. Transfer mixture to a strainer and set aside until it reaches room temperature.You may reserve the oil for later use.

8 months ago by Bren Herrera
The holidays are here and one of the best things about celebrating is recognizing and acknowledging the different ceremonial and traditional feasting throughout. In our household Christmas is the principal celebration, always fueled by food. And, following is ...

2 years ago by Bren Herrera
Who knew coming up with recipes for kids to make would be such a fun task?! I had no idea, really, what I was getting into when I decided to offer free cooking classes for the kids  (no matter where in the world!) every week since we're sheltering in place a...